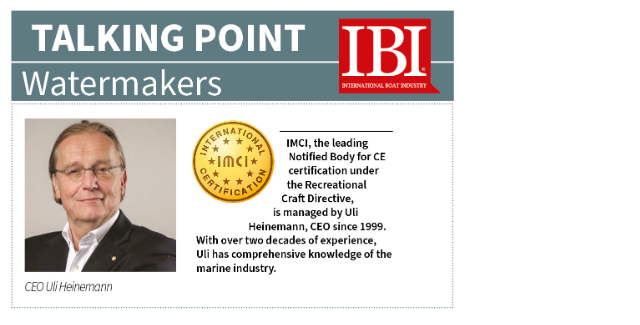 Not so long ago, salt water treatment systems on board watercraft were pure luxury. After all, it is more than appealing to have fresh water available in large quantities for all conceivable purposes in an environment dominated by salt water. The independence from port-side drinking water is also an advantage. However, in most cases the facilities were only to be found on high-priced, large yachts, which naturally could provide the necessary space and supply energy.
However, the water purifiers were space-consuming, prone to faults, in great need of care and extremely energy-consuming.

That is history. The systems have now shrunk to small dimensions and are affordable. They require considerably less operating energy, less maintenance and have become more robust. Apart from the smallest systems that can actually be operated by muscle power, however, all systems require electrical energy to turn seawater into drinking or shower water.

As a result of this trend, watermakers can now be found on boats of less than 24m hull length, which are known to be within the scope of the Recreational Craft Directive 2013/53/EU (RCD) when they are marketed in the EU. The same applies to the United Kingdom under a law with identical content but a different name.

WHAT IS TO BE CONSIDERED?

However, as an electrically operated device, it is within the scope of other directives. Depending on the design, these may include the Electromagnetic Compatibility Directive 2014/30/EU (EMC), the General Product Safety Directive (GPSD) 2001/95/EC and others.

Good to know that there are no taste directives or standards!