When sailing was discontinued as a discipline at the Paralympics in 2015, it marked the start of a noteworthy project. IMCI Inspector Peter Jacops placed a request on social media which he aimed directly at the architects he works with asking for help to create an affordable boat for Para Sailors around the globe and to do so pro-bono.

This request was shortly after answered by Simonis Voogd Design office, based in Cape Town (RSA), who with the help of a common friend and former Paralympic sailor Russel Vollmer went ahead to design a new boat that would be competitive, affordable and sexy looking. After volunteers built several plywood prototypes around the world, Far East Boats, headquartered in Shanghai (CHN), joined the party and offered to build the boats at cost price. When the CE certification was due at the end of the production tooling, IMCI took over this task for a symbolic amount to add their support to the project.

Alex Simonis, one of the S\V14 designers: This boat is now the most accessible and most affordable product of its kind on the market. It is with great pleasure that we welcome IMCI who joined our group of benevolent supporters. IMCI supports our non-profit organization in this common effort by awarding the CE certificate to the S\V14. We as SV14.org and our builder Far East Boats are proud that the S\V14 has met the certification standards and feel that with this stamp of approval by IMCI it will give those who want to buy and sail a SV14 the piece of mind that we have left no stone unturned to ensure that the boat is as safe as it could possibly be and built to the highest standards found in the industry.”

Ulrich Heinemann, CEO of IMCI says: “It is a pleasure to support this charity project. The boat complies with the latest ISO standards and is matching the Recreational Craft Directive in Module A1 in Category C.” 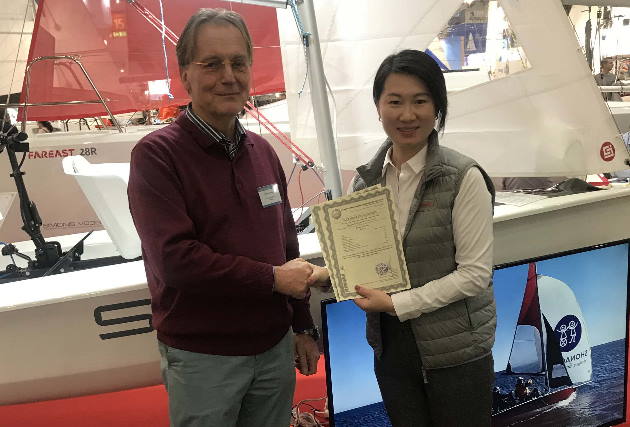 MCI wishes them all the luck in expanding inclusive sailing around the world.