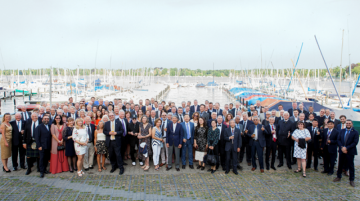 Celebration in conjunction with the ICOMIA/IFBSO Congress 2018 in Berlin

ICOMIA, the International Council of Marine Industry Associations, and IFBSO, the International Federation of Boat Show Organisers, hold the joint congress in a different location each year to coordinate programmes between cooperating countries. Each year the Congress is performed by one of its members. This year’s ICOMIA/IFBSO Congress was held in Berlin, Germany and hosted and organised by the International Marine Certification Institute (IMCI).

The first joint session for ICOMIA and IFBSO members featured speakers from IMCI, the European Commission and the German Federal Ministry of Transport and Digital Infrastructure. Several days of meetings, presentations and workshops followed. In parallel to the congress IMCI held an Executive Committee meeting and an Inspectors meeting in Berlin.

The congress ended after a busy week on a beautiful summer evening with a festive gala dinner held at the historic home of the VSaW sailing club at Lake Wannsee.

Together with all ICOMIA and IFBSO delegates, IMCI Directors, Inspectors and head office staff celebrated the 25th anniversary of IMCI in the frame of the gala dinner.

Uli Heinemann, CEO of IMCI, said in his commemorative speech: “With its aim to serve the marine industry, the IMCI Board, the IMCI Inspectors and the head office staff have achieved a lot in the last two and a half decades. IMCI remains well respected by the market and IMCI is considered by many to be the leading Notified Body for CE certification. Since 1993, IMCI, as a Notified Body under the Recreational Craft Directive (RCD), has certified more than 10,200 types of craft, built by more than 2,100 boat manufacturers. Over 550 component manufacturers have received more than 8,800 certificates for a wide variety of marine products. The certificates were sent to clients in 74 countries. Besides that since 2005, more than 50 marinas have been certified based on a standard developed in-house, which became the basis for ISO 13687 series and ISO 21406.”

The next ICOMIA/IFBSO Congress will take place from June 4-7, 2019 in Split, Croatia, and will be hosted by the Croatian Boating Industry Association.