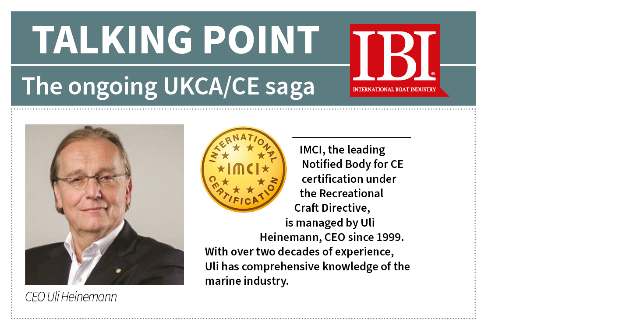 What is going on with the UK? Following Brexit the UK formally left the European Union on February 1, 2020. This basically meant that the CE mark, which comes with several directives, was no longer legal in the UK and a new mark, the UKCA mark, was created as an alternative. Owing to the complexities of implementing the new mark in such a short period of time, it was deemed best to retain the CE mark for England, Scotland and Wales for a transitional period until the end of 2021. Northern Ireland has a special status in which the CE mark continues to apply. During this transitional period, all manufacturers should be able to get used to the new mark and the EU Notified Bodies should have the time to endeavour to obtain UK accreditation so that they can continue their work as a UK “Approved Body” instead of an EU “Notified Body”.

Quite simple really, as both the accreditation standards (ISO/IEC 17020 and ISO/IEC 17065) are truly international in nature and the Recreational Craft Directive has been adopted 1:1 as the UK Recreational Craft Regulation. The recognition of certifiers should therefore have been a relatively simple piece of admin. Unfortunately, it’s not turned out that way! The procedure for recognition had to be gone through completely in England, which has resulted in very high costs and months of time.

UNDER PRESSURE
Shortly before the deadline the acceptance of the CE mark was quickly postponed until the end of 2022. Despite immense efforts by the audit staff of UKAS (United Kingdom Accreditation Service, the British accreditation body), the former deadline was apparently untenable – perhaps no surprise given the authorities are seriously understaffed. Out of the 31 certifiers under the EU recreational craft directive, only four (about 8%) started the accreditation tour through the UK, with only one of them reaching the finish line in the original timeframe.

Under pressure, the UK, after another change of management personnel shortly before the deadline, is now allowing the use of the CE mark until end of 2024. This gives the industry and the accreditors some breathing space at least, but spells disaster for the certifiers who are striving for UKAS accreditation or already have it: A great deal of money and effort was spent on recognition and now the carpet is being pulled out from under the feet of the certifiers for the second time.
What will happen now at the end of 2024? Will there be a third extension of CE acceptance or perhaps even a reapplication of the United Kingdom to the EU!? Who knows?

The only certainty is the confusion is sure to have an impact on future prices for UKCA certification from the beginning of 2025.