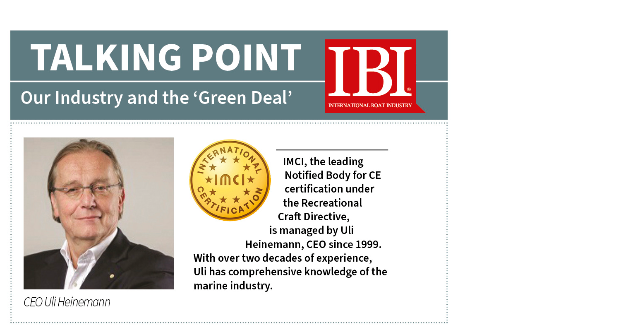 Our Industry and the ‘Green Deal’

The EU Commission has recognised that Europe’s seas and its environment are a source of natural and economic prosperity for Europe. To ensure future prosperity, it should be preserved and protected.

The so-called European 'Green Deal’ was proclaimed this year and will, it is planned, make the EU the first climate-neutral continent with the help of with the help of clean energy sources and environmentally friendly technologies.

Through a whole package of measures, the EU aims to improve the health and quality of life of its citizens, address environmental problems and reduce greenhouse gas emissions.

With the aim of reducing net greenhouse gas emissions by at least 55% by 2030 compared to 1990, the EU Commission has presented concrete proposals for a new climate, energy, transport and tax policy – an ambitious goal, that is sure to have major impact on our industry.

A study report, just submitted by a consortium contracted by the Commission with regard to a possible improvement of the Recreational Craft Directive, advises the EU to take a number of measures that should definitely be seen in the context of the Green Deal. Should these be implemented by the Commission in the form of a new RCD, which is to be expected in principle, then this means, among other changes, above all the reduction of exhaust gases from the propulsion engines of our watercraft.

The industry has certainly done a lot in recent years to reduce exhaust gases significantly and is endeavouring to reduce them even further. The requirements of the next directive may then still have to be complied with. However, this will be the end of the line and further optimisation of conventional engine technology will hardly be possible.

Where do we go from there? No more internal combustion engines or only those fired by alternative fuels? Fuel cells? Pure electric drive?

Many potential solutions are in development, and that is a good thing. We now certify craft that are powered by far more than a thousand kilowatts from internal combustion engines. There are outboard engines with more than 500 kilowatts! Will they still be around in the future? Probably not in the long term. Some craft produced today will quickly become dinosaurs. We are already facing a radical change in the medium term. 2030 is not far away. We need to start thinking about fundamentally new concepts now. We need to get to work!

The good news is: Emission-free sailing craft have been around for some time!