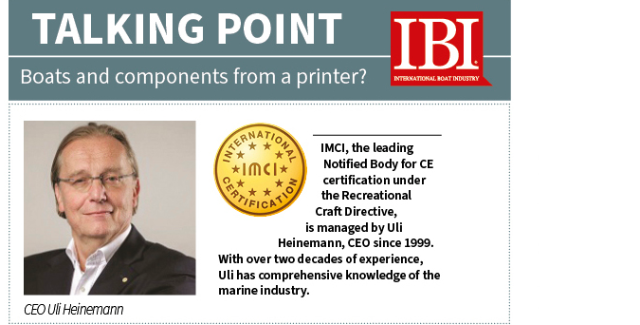 Boats and components from a printer?

3D-printing, also known as “Additive Manufacturing (AM)”, is a comprehensive term for all manufacturing processes in which material is applied layer-by-layer to create three-dimensional objects.
The layer-by-layer build-up is computer-controlled from one or more liquid or solid materials according to specified dimensions and shapes. Physical or chemical hardening or melting processes take place during the build-up.
Materials for 3D-printing currently include plastics, ceramics, metals and also concrete. Carbon and graphite materials for 3D-printing carbon parts have also been developed. Although it is mostly a moulding process, no special tools are required for a concrete product that have the respective geometry of the workpiece stored, e.g. laminating or casting moulds. Plans are first designed on the computer, translated into control data and then sent to the 3D-printer. 3D-printers range in size from small, private printers to portal robots, which by their very nature will have to be larger than the workpiece.

What is the state of boatbuilding with regard to this technology?

Although the first patent application for the process was filed as early as 1986, 3D-printing is still in its infancy in our industry. Certainly, the production of smaller components, such as the housings of bilge pumps, lends itself much more readily to this than the production of entire boat hulls. However, this is also already
happening.
The technology has mainly involved elastomers and glassor aluminium-filled thermoplastics, which can be coloured or transparent.
The difficulty in printing large and rigid structures, such as hulls, is that the strength and stiffness are quite different in different directions of the boat. Finally, there is no connection between the respective print layers by any fibres, while in the direction of the print layers fibres may be oriented in length.

ISO 12215, the standard according to which the strength of boats and yachts up to 24 metres hull length is assessed, allows the technique in general, but is not yet really helpful with regard to CE certification of the vessels.
Perhaps something will be done about this in the next revision?

Only when digital, additively built boats or components become more efficient, more quickly available, lighter and more cost-effective, will 3D-printing really be able to establish itself in the industry.