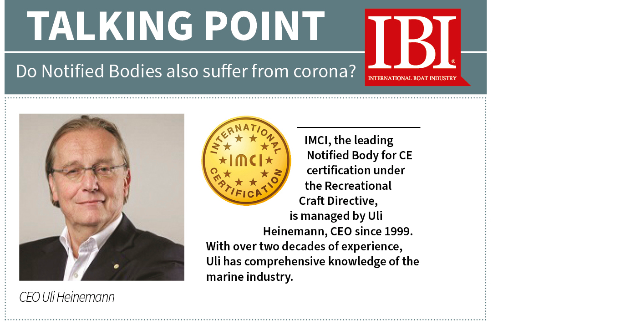 As is well known, the part of our industry producing craft from 2.5-24m in length and their components and engines for sale on the EU market, are subject to the Recreational Craft Directive 2013/53/EU. Part of the scenario of this legislation are the so-called ‘Notified Bodies’, which, depending on the module applied, can award the required CE mark after the product has passed the assessment. Products that are within the scope of the boating directive shall be labelled with this mark.
Now our industry, like all others, is suffering from the pandemic, although not as much as I initially feared. In some sectors the numbers have completely collapsed, in others they are stable and, in a few sectors, they have even improved surprisingly.

So how has the daily life of the Notified Bodies been impacted? How are they meeting the challenge of the new world we find ourselves in?

Inspections at yards or other manufacturers always involve travel. As we all know, travelling is very difficult at the moment, especially when it requires crossing national borders. Some countries have simply closed their borders, others keep them open under certain conditions.
Be that as it may, this situation prolongs the entire certification process or even makes it impossible. The costs also increase. As a way out of this, Notified Bodies are now starting to use remote inspections in some cases, as has been common practice for classification societies in the large shipping sector for some time. Certainly, this approach cannot completely replace face-to-face inspections, but it can complement them in a cost-effective way. In the end, only one or two inspection visits are necessary instead of two or three. The outstanding, unclarified points are then clarified later online.
The inspector of a Notified Body simply instructs a member of the manufacturer’s staff within the framework of a recorded video conference to show him one or the other objects via camera or to take a certain measurement before his eyes. The recording is then finally archived and the matter is settled. The CE mark beckons.
Things are moving forward!